Of all track and field events, the hurdles is the most nail-biting. A magnificent athlete at the peak of their powers can be several metres ahead of the rest … yet fail at the final hurdle and finish last. The delayed Tokyo Olympics will hopefully take place later this year, and I’ll be following the exploits of the great Spanish 110-meter hurdler, Orlando Ortega, with both excitement and trepidation. I’ll know that, however much hard work and sacrifice he has put in over years, any one of those devious ten hurdles might take him out and keep him off the podium.

Ensuring patient access to medicines often feels like the 110m hurdles. While their final stretch is a lot longer than the roughly 13 seconds Ortega has at his disposal, patients in Europe also face 10 major hurdles before they can get access to new medicines and treatments. 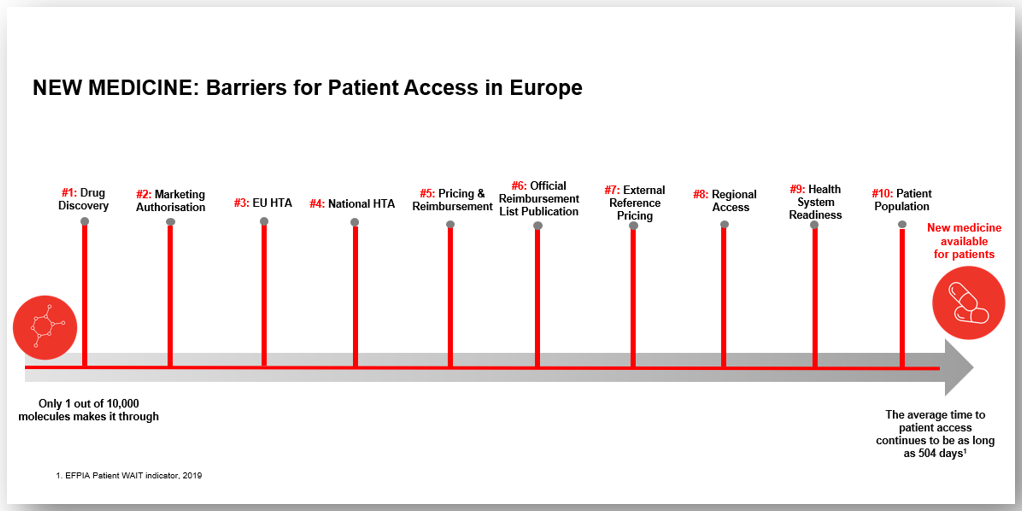 The first hurdle is the actual science involved in developing the medicine. Only 1 in 10,000 of molecules initially tested in a lab eventually become a medicine. That’s just 0.01% that actually make it past the starting blocks!

Next up, we get to the HTA (Health Technology Assessment) hurdles, where new medicines and other health technologies are evaluated based on their added value compared to existing ones. Hurdle number three—EU HTA—is still under construction, and we had hoped it would lower the next hurdle: national HTAs. But it looks like EU HTA may become simply an additional hurdle that adds complexity and duplication.

At hurdle number four, the track then widens out into a wider race, as most countries have their own HTAs, which vary greatly in complexity.

The fifth hurdle involves national pricing and reimbursement. In theory, this should take a maximum of 180 days, but the Transparency Directive rule is seldom enforced by the European Commission, and we see huge discrepancies between countries: for example, on average from 53 days in Germany to 684 in Portugal and 749 days in Poland. 1

Some countries, like Italy and Spain, then have a sixth hurdle, as there is a delay between the moment pricing and reimbursement are agreed upon, and the moment these are formalised through publication in an official gazette.

Other countries then add a seventh hurdle. In Romania, for instance, medicines will only be approved if they are on the market in 12 other EU countries, and even then, reimbursement must be set at the lowest of those prices. This so-called External Reference Pricing helps explain the 775-day median delay in Romania for patients to access new medicines.

The race is not over yet! In a number of countries, including again Italy and Spain, once national authorities agree on pricing and reimbursement, the process passes on to relevant regional authorities. The amount of time this hurdle takes varies enormously depending on the region in question.

National level and regional level pricing and reimbursement decisions are NOT the end of the journey. Next, we have health system readiness, which assesses whether adequate budgets, and the necessary registry, diagnostic or other supporting healthcare infrastructure, are in place.

Last but not least, the final hurdle is patient population. This is usually deemed to be quite broad at the stage of EMA marketing authorisation, but by the time the previous hurdles have been confronted, actual availability of a medicine or treatment may be very limited indeed: only on a 'named patient' basis or unavailable in a number of localities.

These hurdles frustrate everyone, but most of all the patients who could benefit from earlier access to healthcare innovations. But fixing access is of course immensely challenging. There are so many, deeply ingrained, duplicative processes in place which need to be streamlined. Where does one start? For one, by evaluating how we can learn from the speed observed in our collective reaction to the pandemic to make it stick even in normal days (e.g. Commission approval in 24 hours vs. 67 days, parallel HTA assessments). And second, by working together more effectively, across markets, and across stakeholder groups. The right of all Europeans to timely access to affordable, preventive and curative care of good quality is one of the key principles of the European Pillar of Social Rights. We need practical solutions, fast, to ensure we respect it.

Battling diabetes: no sign of slow-down 100 years on from discovery of insulin
Europe's medicines ecosystem: how can it be reshaped for the benefit of patients?

Tags in this Article:

PRIME TIME: Reflecting on the first 5 years of the EMA’s PRIority MEdicines scheme

It's hard to fathom that five years have passed since the European Medicines Agency (EMA) adopted the PRIority MEdicine (PRIME) scheme. In March 2016, PRIME was received with high expectations for greater speed of access for patients in Europe. On this five-year anniversary, I’d like to offer several reflections on PRIME from the viewpoint of one innovative pharmaceutical company that has not had a PRIME-designated product to date.